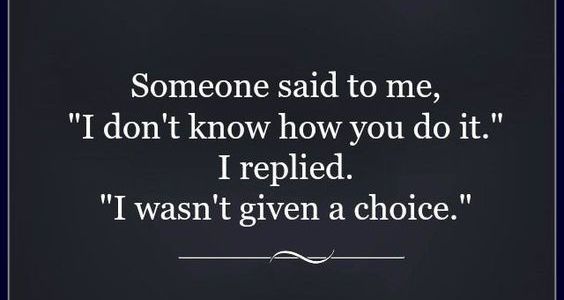 My car has a feature where you can change the rearview mirror from an actual mirror to a camera view from the rear of the vehicle. When I first used it, it gave me a headache. It was as if my brain knew I should have been seeing a reflection and this was just not right. I’ve adapted and really love how great the view is behind the car, but I never see myself in the rearview mirror, a fact that I like, I don’t really want to look at me anyway, but others might not appreciate as I have no idea how bad my hair may look or if there is a piece of spinach in my teeth. I also can’t see passengers or cargo in the back of my vehicle which is beneficial to paying attention to the road, but adds to my oblivity.

This time of year is hard for me. August 2008 my dad, who was undergoing chemotherapy for Lymphoma, basically got sick with a cold that spiraled out of control killing him on August 26th. Strangely I had a very intuitive 13 year old that announced on the 25th we needed to go be with him. He died a few hours after we arrived. August 26th has always been this strange day that lingered between my mother’s birthday on the 25th and mine the 27th, it was just a day between two celebrations, now its a sad anniversary of a tragic event in our lives. I don’t know when I began to dislike my birthday. I remember a picture from 13th birthday in a cute pinafore dress my mother made, holding a store bought cake (store bought was a huge deal in my childhood, my mom could make EVERYTHING!) with a tiny plastic record player. I remember being excited to turn 30, because I was so excited to be a real adult, no longer looked at as, “oh she’s just a twenty-something.” I remembered that everyone said turning 50 was such a hard thing, so the boys and I spent the 50 days before my 50th birthday doing 50 random acts of kindness, it was so much fun!

But at some point I’ve grown to loathe being the center of attention. August 27, 2008 towers in my memory of what a horrible day to celebrate a birthday, there was in fact no celebration whatsoever that year, not really an acknowledgment of it all. We were all with mom at Great Wolf Lodge when dad was home sick and mom left early because she knew if he didn’t got to church it was serious. By my birthday later that month we would spend the day making funeral arrangements and writing dad’s obituary. The memory of writing dad’s obituary on my birthday has rather drowned out any good memory I have of actually having a “happy” birthday.

I left Odessa after dad’s funeral, and never really wanted to go back. I wanted to walk away from it all and I pretty much did. I had a busy life with a 7th grader and 4th grader and a traveling husband. If I’m honest with myself, my husband became everything my dad had been to me and more. I was married to my best friend, you hear that all the time and it seems cliché but he really was. He was smart, creative and a great dad to our kids. I easily focused on the now. Fast forward to 2016. I’m working two jobs focused on paying for college and private school while still saving for retirement and then Russell drives home on July 27th sick. I would discover later that his fever was so bad he had the heat on in his van, in Texas, in July! He took my car to the dealership because of some problem I can’t even remember now, went to the doctor and never really got out of bed again. September 9th he was dead, his body ravaged with infection that would eventually cause his heart to fail. I arrived in the hospital in the wee hours of the morning to find paramedics had taken over CPR on a clearly dead Russell. Suddenly the loss of dad eight years earlier was compounded by the loss of the person who completely filled that void in my life.

It’s not that I have no experience with death, or loss. My grandfather died in 1981, his dad in 1983, my dad in 2008, my grandmother in 2009,my brother-in-law in 2010, his mother in 2012. It’s not that any of those losses were insignificant. It’s just that each of them I faced with him, I got through them with him, I leaned on him. Then he’s gone and I feel I have no person left in which to lean on now. Now I am the one on whom others lean, and I feel very, very, weak and inadequate.

It’s now approaching five years since Russell died. Looking back is still painful and raw. I find myself dreading the end of summer because of the memories that haunt me so. I find my self tender, sensitive and easily emotional. It still doesn’t feel real. I’ve found myself thinking was it really September 9th? Do I have the date right? All a vain attempt of my mind to still not believe that it is real, that this is my story.

The thing about it is … my life is good, because God is good. He’s written a story that has taken turns I never wanted but also traveled roads I never would have had the courage to choose myself. Five years later, I’m growing older, my life is full and wonderful in so many ways, yet, I still desperately want to share my life, not with just someone, with THE one I pledged to love until death do us part. Yet I’m not dead. And that is not an accident. I am discovering day by day something God has in store for me. I’ve learned that while that relationship was vital, it is/was not essential. What is essential is that I have faith to face another day, no matter what that brings. God has numbered my days and each one counts, whether I want it to or not. Because HE lives, truly I can face tomorrow. I wish I didn’t know that he’s been gone 1,825 days. I wish he could meet our new daughter, I wish he could walk her down the isle to marry our son, because she doesn’t have a dad anymore either. I wish he could see how hard Paxton is working to get the education he needs to be successful and what a wonderful man he has become. I wish I could tell him about how hard and wonderful the last year has been for Ryan and how after some really, really dark days, he is coming into his own. I wish I could type theses words without crying. I know wrapped up in all this is that I have both had and lost the best thing that ever happened to me because the God who sustains me orchestrated the plan and gives me the strength to carry on, joy to drown out the sorrow, health and provision to continue to serve him and the will to continue to not only put one foot in front of another but joyfully serve Him everyday, especially when it’s hard. I am able to look at the big picture and say, “I am grateful.”